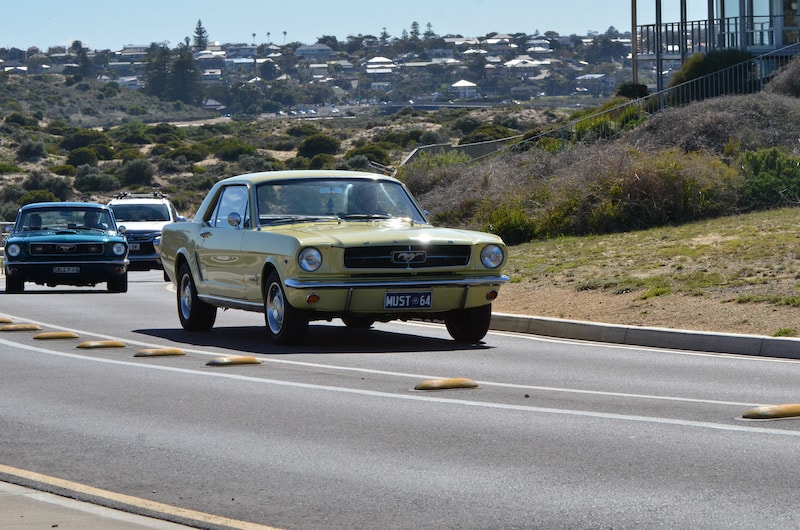 Well we were lucky that the weather gods granted my wishes and we were blessed with great weather for the Southern Mustang run down to Sellicks on Sunday 15th of August.

Starting from Wiltshire Motor Trimmer’s, the group of approximately 15 mustangs set off in a procession down Richmond Rd, excited about the day ahead.

From Richmond Rd we turned onto Marion Rd and then onto the Southern Expressway. We had plenty of spectators and it was a great sight to see the various brightly coloured Mustangs lined up as far as the eye could see.

We took advantage of the beautiful weather and cruised along the Esplanade at Port Noarlunga down to Moana and back onto Commercial Road and then on to the Aldinga Esplanade with the highlight of the day being on the lower Esplanade at Silver Sands.

The views of the coastal landscape were spectacular and I’m certain made us all breathe deeper and feel a little lighter!

We arrived at the Victory Hotel in Sellicks Beach and were welcomed by the staff and seated in The Cellar, where they stock wines focused on the McLaren Vale region with additional wines from other regions in S.A, all other states as well as the very best from overseas. We were spoiled with the wine selection and meal choices. The food was top shelf and so was the company.

From all the feedback that has been received, all who attended had a great time.

I can’t take all the credit for the day as it was my wife’s idea to go to the cellar at The Victory and to drive along the Esplanade. I guess what they say is true behind every great man is an even greater woman!

From all reports it was a great event and many people were happy with the day out.