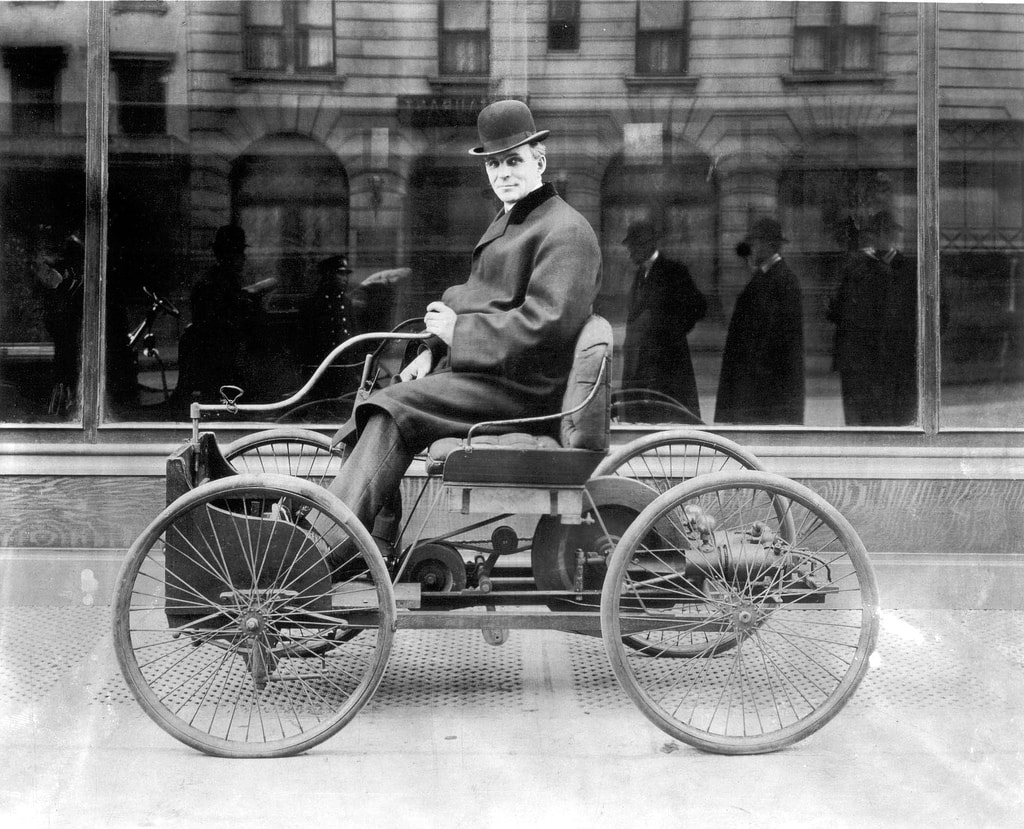 A Habit of Success

Breakthroughs and big moments have been frequent for Ford

Ford’s early milestones paved the way to success over 108 years of manufacturing “Blue Oval” automobiles. Everyone knows 2011 is Chevy’s 100th Anniversary, but it is also the 100th year since Henry Rod Sr. fought the Selden Patent suit and won. This was a big victory that helped all American automakers, but Henry Ford was the guy who went to court. However, this surprised no one back then. In his empire-building days, Henry was just as colourful and irascible as Billy Durant, the guy who teamed up with a racing car driver to form Chevrolet.

Henry Ford completed his first car in the summer of 1896. He called it the “Quadricycle”. With his creation, he was on his way to becoming an automotive pioneer. In mid-1899, his car-building genius came to the attention of local businessmen, including Detroit mayor William C. Maybury and William H. Murphy, one of the wealthiest men in town. With their help, the Detroit Automobile Co. was organized with Henry as superintendent.

By 1902, Ford hadn’t built enough cars to keep his backers happy and they brought Henry M. Leland in as a consultant. This infuriated Ford, who immediately quit, taking $900 and William Murphy’s promise not to use the Ford name as a settlement. Murphy abided by the agreement and the car that Henry Leland would build for the former Ford backers became the Cadillac.

Henry Ford next built two racing cars called the Arrow and the 999. In June 1903, Barney Oldfield became the first driver to circle a one-mile track in less than a minute (59.6 seconds was his speed) in Ford’s 999. In January 1904, Henry Ford drove a revised version of 999 on the ice of Lake St. Clair and set a world land speed record of 91.37 mph.

Ford, however, was not recognized by the Association of Licensed Automobile Manufacturers (ALAM). They rebuffed his efforts to get a Selden license. So, Ford decided to fight against their lock on the production of cars. In January 1911, he became an industry hero when the patent was knocked down.

By that time, Ford had already been building the Model T for three years. It was a remarkable, reliable and simple automobile, with a 20-hp side-valve four-cylinder engine, two-speed planetary transmission and a 100-in. wheelbase that could go 45 mph and get 25 mpg fuel economy. Ford set up assembly lines to mass produce his ‘flivver’ and by 1914, he was making 300,000 per year.

Like the T, the Model A was a side-valve four, but it was twice as powerful at 40 hp and set in a 103.5 inch wheelbase chassis with three-speed sliding gear transmission and four-wheel brakes. There was a pretty Lincoln look had been the car, and introductory pricing as low as $385. It lasted just four years, though nearly 5 million had been made by 1932, when its successor, the Ford V-8, arrived.

Chevy took over auto sales leadership in the 1930s, winning all years except 1935. Still, the Ford V-8s were popular. Gangsters like Clyde Barrow liked their “getaway” speed and Ford -8s dominated stock car racing. Ford racing specials were a mainstay of the Automobile Racing Club of America in the era.

Fords got four-wheel hydraulic brakes for 1939 and the company introduced the Mercury. A new grille used on 1940 Deluxe models turned the Ford of the year into a legendary hot rod. The first Ford Six since the Model K arrived in 1941. Then came Pearl Harbor and Ford converted to military production.

The all-new 1949 Fords were a revolution for the company. Gone were transverse rear springing and torque tube drive shaft. The basic style was used through 1951, when a sexy Victoria hardtop was added, along with optional Ford-O-Matic transmission. The flathead V-8 was still under the hood until 1954.

Ford’s first overhead valve V-8 was followed by introduction of the sports-car-like Thunderbird. By 1957, the horsepower race was in full swing. Ford even offered a supercharged 312-cid V-8 rated at 300 hp. Mechanical innovations highlighted Ford model year 1958, while styling changes were made in the trim department. The following season witnessed the introduction of the T-Bird-inspired Galaxie that was awarded the Gold Medal for Exceptional Styling at the Brussels World’s Fair.

The big news for 1960 was the compact Falcon. The mid-size Fairlane arrived in 1962. Model year 1963 was a high-water mark in the performance books at Ford. Not only was a new V-8 offered in the compact Falcon, but NASCAR and drag racing competition brought the most powerful engine ever to come from Dearborn — the 427-cid V-8. It dominated NASCAR racing. In mid-1964, Ford launched the Mustang, which became the best-selling new car ever. 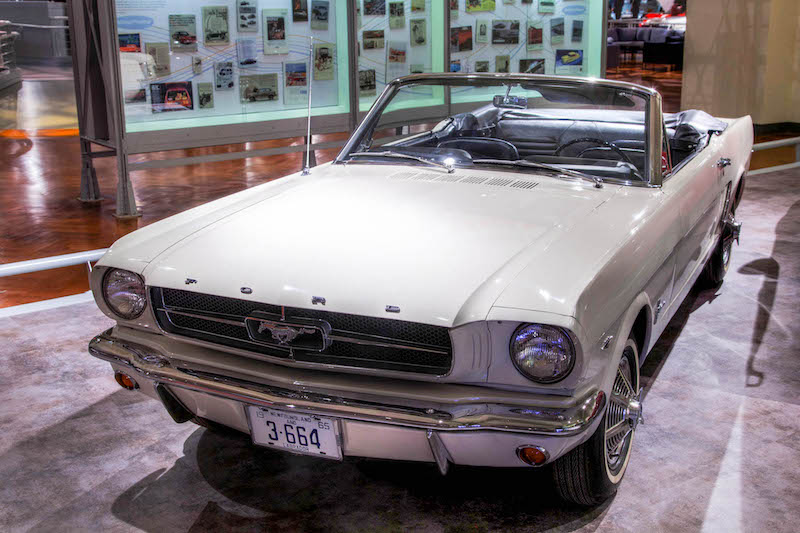 The LTD arrived in 1965 for luxury-hungry consumers on a budget and over 100,000 were sold. The next year brought a larger, more powerful Mustang. The Fairlane was completely redesigned in 1966 and large enough to accommodate big-block V-8x. For 1967, NASCAR allowed the use of the intermediate-size bodies in Grand National racing. For 1968, the intermediate got the incredible Cobra Jet 428. Ford was in the swing with its muscle cars.

In 1971, Ford produced the 429 Super Cobra Jet Torino Cobras and insurance companies started tightening the noose on “Supercar” owners. Experts recognize 1971 as the last year of muscle era Fords and introduced the now infamous Pinto. No automaker offered a more complete line than Ford in the 10 years between 1976 and 1986. Offerings ranged from sub-compacts to LTDs and Thunderbirds, with engines all the way up to the 460-cid V-8 through 1978.

Few realized it at the time, but the new Fairmont would serve as the basis for a whole line of FoMoCo rear-drive models. A Euro-styled ES edition became available, but most of the attention went to the Futura Sport Coupe, which was marked by wide B-pillars and a wrap over roofline reminiscent of the Thunderbird’s. The Granada tried the Euro route too, with a blackout-trimmed ESS variant. The Pinto offered Cruising Wagon and Sports Rallye packages. Thunderbird Diamond Jubilee Edition of 1978 marked Ford’s 75th anniversary.

Ford’s centennial was celebrated in 2003 and a new Ford GT was introduced. There were several “Centennial” models in various car-lines. The Ford Escape Hybrid arrived in 2004. The next year the gorgeous, retro-styled Mustang bowed. The Fusion arrived in 2006 and the Taurus disappeared. Ford introduced the Edge in 2007, but it failed to take the edge off a $12.7 billion loss. The company ditched its stake in Aston-Martin and prepared to sell Jaguar and Land Rover, which India’s Tata Motors bought in 2008. A Gen VI Fiesta arrived in the U.S. in 2009 when Ford gained respect for turning down government bailout money.

The news for 2010 included the announcement that a new Gen III Focus was coming out in 2012. More recently Ford has released the news that it is on a roll in terms of sales and profits.