Bullitt is a 1968 American dramatic thriller film directed by Peter Yates and produced by Philip D’Antoni. It stars Steve McQueen, Robert Vaughn and Jacqueline Bisset. The screenplay by Alan R. Trustman and Harry Kleiner was based on the 1963 novel, Mute Witness, by Robert L. Fish, writing under the pseudonym Robert L. Pike. Lalo Schifrin wrote the original jazz-inspired score, arranged for brass and percussion. Robert Duvall has a small part as a cab driver who provides information to McQueen.

At the time of the film’s release, the car chase scene generated a great amount of excitement. Leonard Maltin has called it a “now-classic car chase, one of the screen’s all-time best.” Emanuel Levy wrote in 2003 that, “Bullitt contains one of the most exciting car chases in film history, a sequence that revolutionized Hollywood’s standards.” In his obituary for Peter Yates, Bruce Weber wrote, “Mr. Yates’ reputation probably rests most securely on Bullitt (1968), his first American film – and indeed, on one particular scene, an extended car chase that instantly became a classic.” The editing of this scene likely won editor Frank P. Keller the Academy Award for Best Editing.

Two Mustangs and two Dodge Chargers were used for the famous chase scene. Both Mustangs were owned by the Ford Motor Company and part of a promotional loan agreement with Warner Brothers. The cars were modified for the high-speed chase by veteran auto racer Max Balchowsky. Stunt coordinator Carey Loftin got Bud Ekins to drive the Mustang for the bulk of the stunts. Both of the Dodges were junked after the filming, as was one of the Mustangs. The other less banged-up Mustang was purchased by a WB employee after all production and post-production was completed. The car ended up in New Jersey a few years later, where Steve McQueen attempted to buy it. The owner refused to sell, and the car now sits in a barn and has not been driven in many years.

According to Peter Yates, Steve McQueen made a point to keep his head near the open car window during the famous chase scene so that audiences would be reassured that it was he, not a stunt man, who was driving.

Bullitt’s reverse burnout during the chase scene actually wasn’t in the script – Steve McQueen had mistakenly missed the turn. The footage was still kept, though.

After losing control of his car and smashing into a parked vehicle, Steve McQueen’s then-wife Neile begged Peter Yates to use stuntmen. So when McQueen reported for duty to find stuntman Bud Ekins sitting in his car, dressed as McQueen, he was furious.

The director called for speeds of about 75-80 mph, but the cars (including the ones containing the cameras) reached speeds of over 110 mph. Filming of the chase scene took three weeks, resulting in 9 minutes and 42 seconds of footage. They were denied permission to film on the Golden Gate Bridge.

Initially the car chase was supposed to be scored, but Lalo Schifrin suggested that no music be added to that sequence, pointing out that the soundtrack was powerful enough as it was.

Although Steve McQueen was credited with the driving during the chase sequence it was actually shared by McQueen and Bud Ekins, one of Hollywood’s best stunt drivers. From the interior shots looking forward inside the Mustang it’s easy to see which one is driving. When McQueen is driving the rear view mirror is down reflecting his face. When Ekins is driving it is up, so his face is hidden.

In 2008, Motor Trend Magazine did an article promoting the 40th Anniversary Edition Bullitt Mustang. Because Dodge had also brought back the Charger, the article featured a promotional gimmick of photographing the 2008 Mustang and 2008 Charger simulating the famous chase scene with the writers breaking down the Chase, moment by moment, to explain each cars’ strengths and weaknesses.

The chase sequence takes place over a number of non-contiguous streets in and south of San Francisco. The sequence apparently starts under Highway 101 in the Mission District. When the Charger does a U-turn on what is Precita Avenue to follow the Mustang, a storage tank on Potrero Hill, in the southeast part of SF, is visible in the distance. The next few scenes are in the Bernal and Potrero areas; you can see green hills to the southwest on the horizon in one shot. Twenty-one seconds later, Coit Tower appears in the Mustang’s front window to the east (as can be ascertained by the buildings’ shadows). They then come to a stop for a Cable Car on Hyde Street and Filbert. The twin towers of Sts. Peter and Paul Church are visible just to the right of Coit Tower. They turn hard left next onto a four-lane street with a concrete median, what might be Columbus. A F-type street car is seen coming the opposite direction. They top a rise and Angel Island comes into view slightly on the left, placing them on about Stockton and Chestnut. They turn north, then west, then south uphill. In the next cut, they are coming downhill, north towards the Bay. They turn west and the next few scenes are inter-cut, reused footage of the same street sequence, as shown by repeated presence of the same Cadillac and a Green Volkswagen Beetle. They drive downhill or north, towards the Bay, and turn west in front of the same Caddy, several blocks north of Van Ness. They turn left or south, going uphill. They then are headed north and turn from Larkin St. onto Francisco St. headed west. In the next scene the Dodge is going north, rounding Laguna onto Marina, having leaped six blocks. They turn from Laguna St., in front of Ft. Mason, onto Marina and in front of the Safeway. (The bottom of the store’s name can be seen as the Dodge veers onto Marina.) They accelerate down Marina with the Marina Green and the Bay visible in the background. In the next cut, Ft. Mason is again visible in the background as they once again round the turn on Marina onto the Marina green. With the next cut they turn in front of the Safeway again. The next cut puts them eight miles away, back in the Vistacion Valley district, turning right from University St. on to Mansell St. From there they cut to Western entrance to Guadelupe Canyon Parkway on San Bruno Mountain in Daly City three miles away, heading East. To extend the length of the chase the cars are shown driving East then West and back and forth with each cut while supposedly heading only one way before the Charger crashes at the Parkway’s Eastern exit in Brisbane.

The map below show’s the whole route as we are supposed to believe. In reality they only filmed on sections of the route – but that’s movie business for ya! 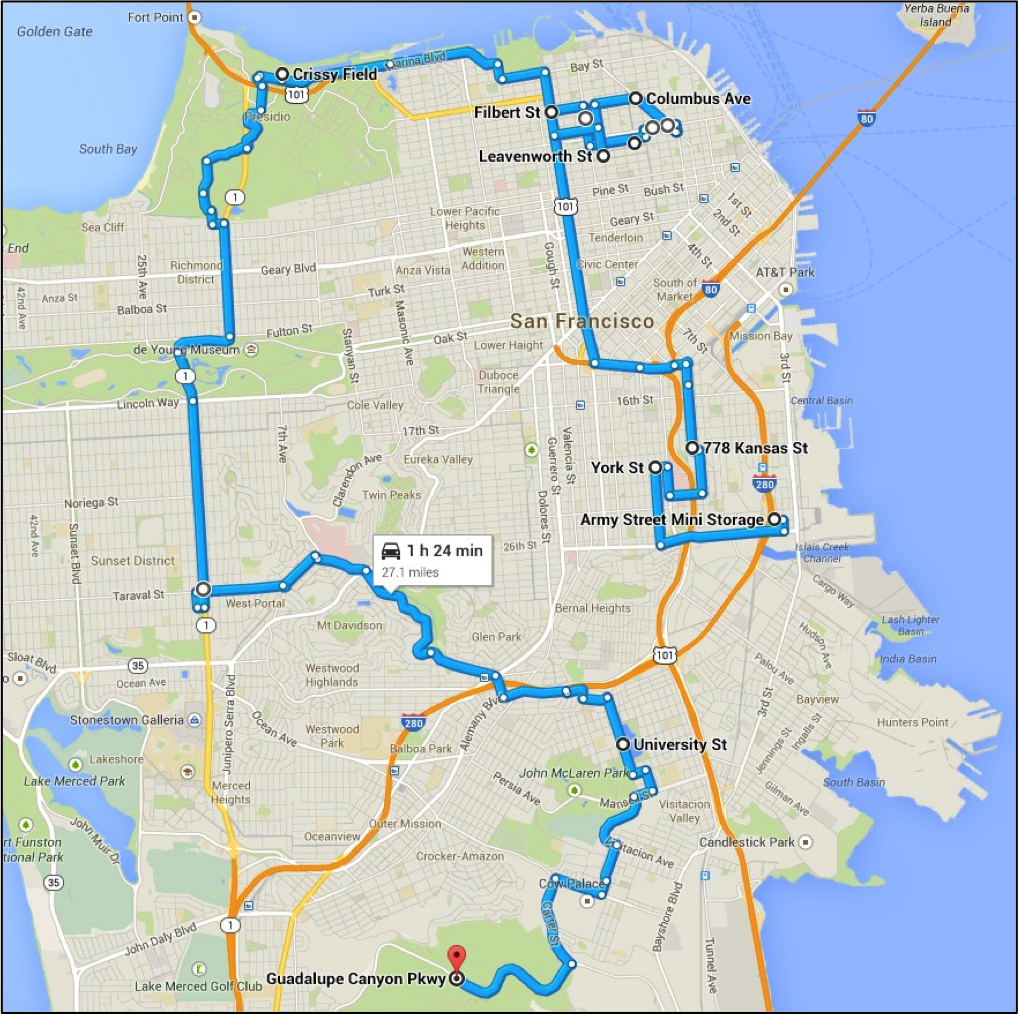