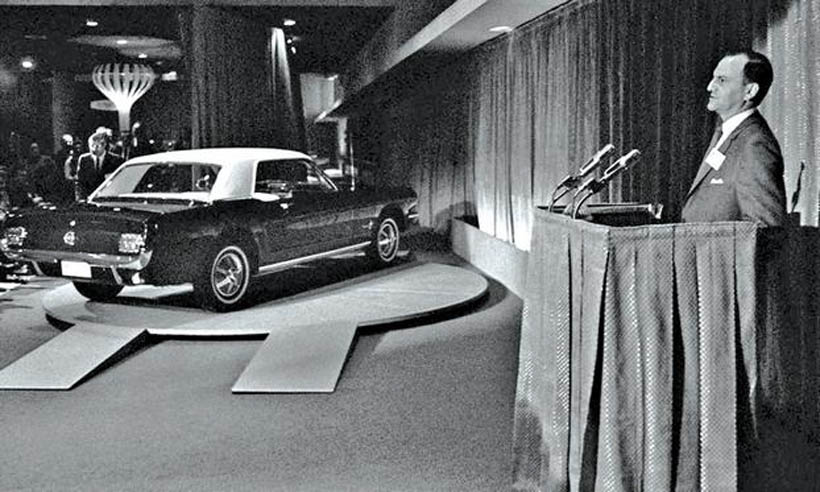 Lee Iacocca looks back at the 1964 sensation

Success has many fathers but failure is an orphan, or so the saying goes. Though many names are associated with the Ford Mustang’s extraordinary half-century run, the irrepressible Lee Iacocca sits at the top of that list.

If Iacocca made the Mustang, the Mustang also made Iacocca. The original pony car forged his reputation as one of the industry’s greatest salesmen ever, a visionary who could spot a market trend nobody else saw and marshal the forces of a huge company to exploit it.

These days Iacocca is living in Bel Air, Calif. He also has a home in Laguna Beach. He will turn 90 on Oct. 15. Norma Saken, his assistant at the Iacocca Foundation, says her boss keeps busy with family, friends and philanthropic activities. Iacocca recently got a new dog, named Spanky, a rescue he named after the first dog he had growing up.

As the Mustang’s 50th anniversary celebration drew near, Iacocca was much in demand.

He doesn’t make many public appearances these days, though he did talk Mustang with comedian and former “Tonight Show” host Jay Leno in December on the “Jay Leno’s Garage” show.

Iacocca agreed to answer some written questions from Automotive News; what follows is an edited transcript. Iacocca revealed that he had to make several trips down the hall to the office of longtime Ford Chairman and CEO Henry Ford II before receiving approval for the car. After the Edsel debacle, Henry Ford was skeptical about taking on risky new programs.

When he eventually signed off on the Mustang, Ford told Iacocca, then head of the Ford Division, that the car had better be a success or else. The rest is history.

Q: How did the Mustang come about? Who suggested it, and what market trends made you think it would succeed?

A: I had a vision of an American-made four-seat sporty car. There were none being produced domestically. In late 1960, when I became the Ford Division general manager, I was in a position to investigate whether producing such a car was feasible. We had no data, but I felt there was a market to be driven by baby boomers.

There are many stories about who actually designed the car. What light can you shed on that?

We projected a limited budget to work with, and Hal Sperlich suggested using a Falcon chassis to limit economic impact of a new car line startup.

After many concept cars, we had an internal competition to find the styling we wanted. Joe Oros’ Ford Styling Studio won the competition with a design sketched by Gale Halderman.

When did the idea of a long hood and short rear deck pop up?

We always liked the European styling using these features. They became a centerpiece for the new design we wanted. 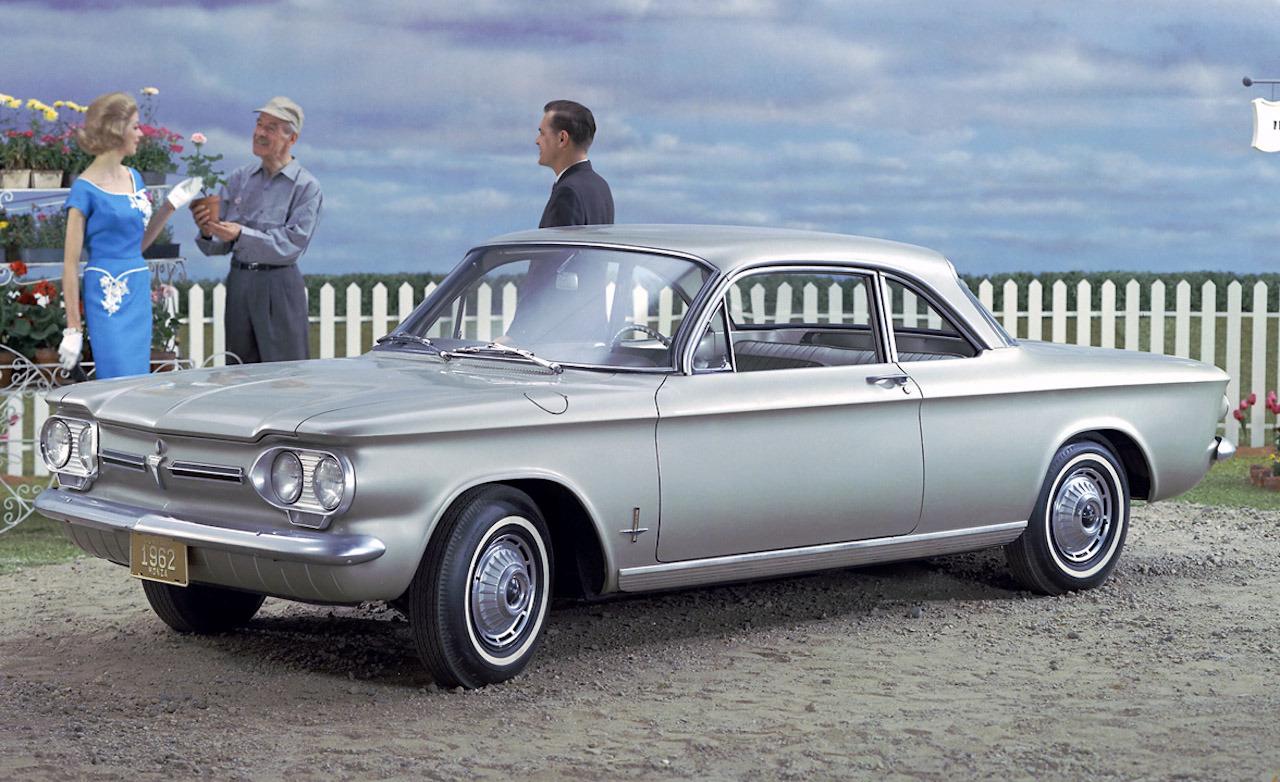 How much influence did the Chevrolet Corvair Monza have on your decision to build the Mustang?

The bucket seat and floor shift interiors of the Monza were becoming popular with GM. Ford had nothing to compete, so I embarked in the direction of planning a car that would incorporate these features.

What problems did you have to solve to get the product right?

Economic considerations would be our biggest problem with getting a new car line into production. First, Henry would have to approve spending the money to build the car, and we would have to bring it in at a good price, which we decided would have to be under $2,500, base price.

Was it difficult to get approval?

Henry Ford II had just dealt with one of the biggest losses in Ford history with the Edsel. It was dumped just one year earlier at a loss of $250 million. Henry was not receptive to launching a new, unproven line of cars which would present further risk to the company.

I made a number of trips to his office before I gained approval to build. He told me if it wasn’t a success, it would be my a–, and I might be looking for a new job elsewhere.

Ford made lots of money on the Mustang. How did you get the program’s finances to work?

Henry gave me just $45 million to develop and build the car. That was an unheard of low amount at the time to design and push a new car line through to production. But we did it. In the first 18 months in the marketplace, we sold 1 million cars. It was the best-selling car at Ford since the Model T in the 1920s.

How did dealers initially react to the car?

They loved it from the start. People were knocking down the doors on introduction day. We sold 22,000 that opening day. Dealers couldn’t stock enough cars to satisfy the demand. Our initial marketing plan worked, and worked well.

What were the key elements in the vehicle’s design and performance characteristics?

We gave Detroit something they didn’t have — a four-seat sporty car with European styling. It was 1967 before either GM or Chrysler could get a car on the market to compete with the Mustang. We gave it a hot new V-8 with sports car handling, and introduced it successfully to the race car circuit, where it did well.

How was the pricing set?

We set several goals at the beginning of the development program. A production car would have to weigh less than 2,500 pounds and retail for under $2,500. We remained true to that pricing goal by offering a basic car with lots of accessories. The accessory market is where we maximized our profits on each sale.

How did you develop the plan to launch it at the World’s Fair, and to give it an extraordinary splash, in early 1964?

When we first set our goals for the program, we wanted to get the car to the market before any competition. An ambitious goal would be about 18 months pencil to market — an unheard of short time span.

I recognized the New York World’s Fair was about 18 months away, and it would be a great venue to introduce the car with intrinsic free advertising. I felt if I introduced this new car line mid-model year as a 19641/2 model, I would have the advantage of introducing a new car to a captive audience without any distractions from all other new-car manufacturers who typically introduced their new-model-year cars in the fall. 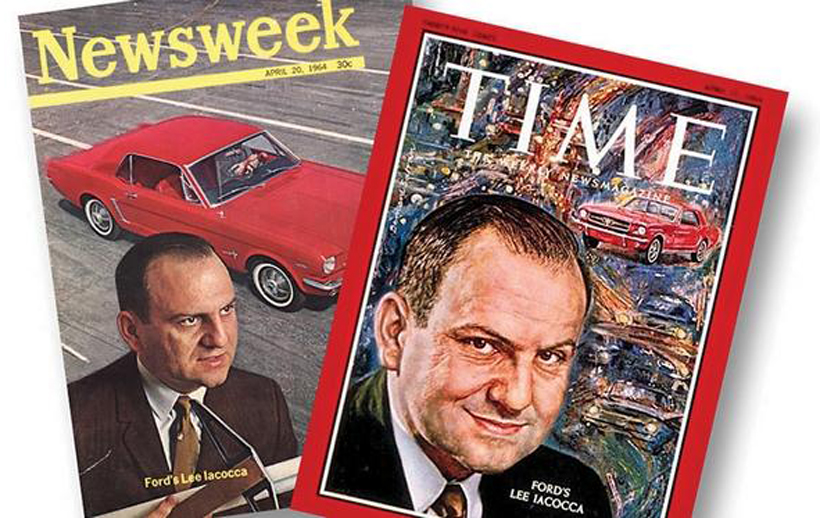 How did you get the car on the cover of Time and Newsweek the same week?

Unprecedented. There had never been a retail product shown on either of these two magazine’s covers, let alone simultaneously. My advertising guru Walter Murphy made it happen. I credit those two magazine covers with an additional 100,000 Mustang sales.

How was the name chosen? We have heard that GM also had a “Mustang” under development at that time — was that a problem? Would the car have been successful if it had been called Cougar or Torino?

It is as difficult to choose a name for a new car as it is to develop the whole car. We had a fellow at J. Walter Thompson Advertising suggest a list of names. Cars were being named with animal names, which seemed to be popular at the time. Our list had animal names, one of which was Mustang.

Gene Bordinat, vice president of styling, and I sat down and chose the name Mustang from the list, because the running horse connotation suggested moving fast through the countryside.

Our team heard GM was considering using the name Mustang, but we registered it first. The Cougar name was strongly suggested by our styling department, but I liked Mustang.

When did you know it was going to be a success?

I had a prototype car built in the summer of 1963 we named the Mustang II to test public perception for this type vehicle. It really was a disguised production styled chassis that gave a very sleek appearance. It was shown first at the Grand Prix race at Watkins Glen Raceway in New York. I knew if it was a hit with the race fans, it would sell well. It was an instant hit, and the styling played perfectly with the fans. I knew right then it would be a successful launch.

Did anything about the launch surprise you? Did it sell to some types of buyers you might not have anticipated?

The surprise was in the huge number of people who put down their money to buy a Mustang. We planned on producing 80,000 cars the first year, and in that first year and a half we sold 1 million.

How do you see Mustang today, after 50 years?

Our team gave America something that became an icon. The Mustang name is known around the world. And they’re still building them, 9 million strong. I think they’re going to be around for a while.